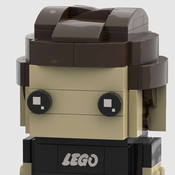 Imagine giant moving cities hunting each other to compete for food and resources. This is the world of Mortal Engines. Only the largest, fastest cities remain to roam the remains of a scarred and barren Europe. Traction City London has grown to an immense size with 7 tiers of factories, growling land engines, airship harbours and proudly wearing the mighty St. Paul’s Cathedral as a crown on its Top Tier.

With London’s massive size however comes an even greater appetite. Will it be the last Traction City still rolling?

The original model I designed for London as a Traction City turned into a 14.000+ piece behemoth despite its staggering 1:2500 scale. After learning about the maximum piece count for Ideas I designed a second model at 1:5000 scale from the ground up to  fit within the requirements.

Breakdown per tier (top to bottom)

I hope to make this passion project into a real LEGO set! I highly appreciate every vote! Thank you in advance for your support!