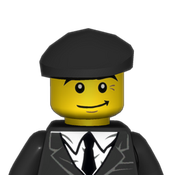 The Farnsworth is a two-way audio and video communications device invented by Philo Farnsworth in 1929, soon after the invention of the television. They're used by Warehouse agents because they are on their own secure frequency spectrum and can't be cracked, hacked, tapped, or otherwise "broken." However, Artie said in Season 5 that it could open it up to being hacked, if Miss Donovan messed with it.

This little project will create a Farnsworth of your very own! Unfortunately it will not work anything like those of the warehouse agents as we were unable to obtain the schematics. However, it is pretty cool in it's own rite.

Join the Warehouse 13 team and find the mysterious objects they search the world for.

Only 168 bricks and you'll be working with one of the most elite teams in the world!