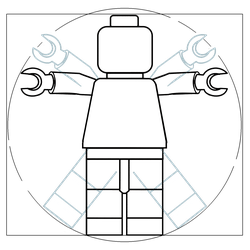 The 3 Basics Elements of Life as we know (and love) it: DNA, The Carbon Atom, The LEGO Brick.  All three are shown rising up from a formation of elemental bricks and being forged as they grow out of the LEGO rock.

DNA Molecule: DNA is present in all living things and contains the genetic information required to recreate the organism for which it is encoded. This LEGO DNA structure depicts the trademark "double helix" or the twisted ladder architecture with the four proteins coming together to form the “rungs” of the ladder. The most difficult part here was finding a way to make the double helix look natural, support its own weight, and have the proper dimensions and biological representations. The DNA strand is first constructed as a ladder, and it just naturally twists into the double helix shape with very little effort and no manual adjustments. You can twist and untwist at will! The model also shows the helix coming together at the top, with the two halves of the ladder and split rungs (proteins) just about to join.

Carbon Atom: Carbon is one of the most fundamental and basic components of all living things. It can form four bonds with an almost unlimited number of elements and makes up about 18% of the human body. In this LEGO version, getting the nucleus of the 6 protons and 6 neutrons to come together in a geometric shape as in a true atom was the real challenge. As with the DNA molecule, this was achieved with a combination of LEGO Technic and traditional elements at the core, with 1x5s, locking hinges, axles, and connectors. It too is quite durable, including the 6 electrons orbiting the core. True to life for a Carbon Atom, the model has 6 protons, 6 neutrons, and 6 electrons.

The LEGO 2x4 Brick: Literally the basic building block of all things LEGO, the 2 x 4 brick has been around since the beginning and is recognized around the world.  To LEGO builders, THIS is the building block of life as we know it!  A fairly simple model, the tiling on the top and tubes in the back make it actually possible to connect to other similar scaled-up bricks, using only the clutch power of the studs and tubes of the enlarged brick.