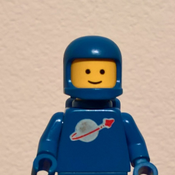 By joostvanvelzen
58 comments
The video (scroll down) explains best and demonstrates the light effects and technic functions.
Main Features:
Light Effects
The ship's main feature is the light effects, which are quite beautiful. With a twist of the gear underneath the ship, the "reactor" comes to life with a ring shaped light effect. The light is diffused and directed through a series of transparent parts to make the main engine light up. When the flywheel slows down, the light is switched off automatically.
Landing Gear﻿﻿﻿﻿﻿﻿﻿﻿﻿﻿
Twist the rocket nozzles to control the landing gear. When the ship is put down, the landing gear locks in extended position. When it is picked up and the landing gear is retracted, the mechanism is constructed such that only minimal friction is needed to keep the landing gear in place. Left and right side can be operated individually, which is useful for playing crash scenario's.
Ramp / Cargo Bay Door
The cargo bay door can be opened or closed by turning the small handle underneath the ship. When closed it is locked quite firmly. So should you want to stow some bad guy in there, you can be sure he won't escape.
Shooters
Got to have shooters.
Cargo Bay
The cargo bay can fit a minifigure, the robot and even some small builds like a satellite.
Holographic Control Unit
Maybe future spaceships will have holographic control units that project all kinds of information in the cockpit. So this spaceship has a control unit that looks like it could be some sort of projection unit.
Just Right For Playing
The spaceship isn't too big, and its shape makes it easy to hold, also for young children.
Why Would This Be A Great Set?
It's fun to build and fun to play with and has some unique tricks.
Notes
Demo!
This short video shows all the light effects and technic functions.