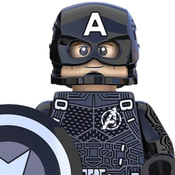 By Alessandro 28
38 comments
The castle is composed of about 2500 pieces, it is divided into three floors and four turrets,
On the first floor there are:
the prison where the white knight was imprisoned
and the treasury full of coins and gold bars
On the second floor the black knight is seated on his throne where he can enjoy the show of the jester
on the third floor there is the castle meeting room.
The stairs in the castle connect all the floors together.
Above the turrets and on the roof, skeleton soldiers guard the castle boundaries
armed with javelins and crossbows.
The castle door and the two doors: the treasury and the prison can be opened.
Story
A dark knight leading an army of skeleton soldiers ravages the villages
stealing all their wealth. Even the bravest of knights seems
that he could not stop the dark black knight's fury and now
he is a prisoner in the castle guarded by skeletons ..
Will he manage to escape and defeat the black knight to bring gold back to the village?
If you like the story, help me by supporting the project,
and you create the ending.
Thanks for the attention