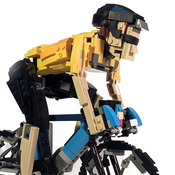 One of the most unique and distinctive birds in the sky, helmeted hornbills are the 'farmers' of the dense, old growth forests of southeast Asia. Their diet is largely based on figs, and because of their large territories, they distribute the seeds to these trees far and wide. They play an essential role in their ecosystem. Their most iconic feature, a red-ivory casque above the beak, gives this oddest of birds it's name; and tragically, this feature is spurring on the demise of the species.

The Helmeted Hornbill is under threat on two massive fronts. Most directly, an increased market in Asia for Helmeted Hornbill casques has led to a thriving poaching trade. Pound for pound, it is estimated that the red ivory casques cost more on the black market than elephant ivory.

But the helmeted hornbill is also a victim of deforestation, which is axcaserbated by the bird's fascinating life-cycle. Helmeted Hornbills mate for life. They only build nests near the top of the oldest and tallest trees in the forests (trees that are becoming increasingly rare, as forest is cleared for cropland). Once inside a nest, a female will seal herself inside until her chick has been hatched, and grown to the point that it is ready to fly - a period of time just under half a year. During this time, the female and chick are reliant on the male to bring back food for them. If the male is poached, the whole family will die.
The poaching trade for these birds exploded around the year 2012. The species is now critically endangered. Public awareness is just starting to pick up steam. Time to bring this bird to brick form.

This model attempts to capture the unique nesting period of the Helmeted Hornbill's lifecycle, while faithfully recreating the bird, including the iconic casque, at a small scale. (Quite honestly, the face of the Helmeted Hornbill could make the next great line of WWF posters - the next banner animal. That face is pretty memorable.) It features a male, a slightly smaller female (true to biology), and a chick (it's red because it's featherless). They are displayed on a section of tree which has its backside open so that the interior nest is fully accessible. The nest hole is large enough for the female and chick to climb out, but there is a ring of tan bricks - the seal - that is insertable. This allows only the female's beak to pass through, an accurate representation of the real nesting arrangement during the half-year sealed-in period.
The tree itself is built on a black stand with a thematically coloured border.
This model makes a great display, but also features many great avenues for educational playability.
If you want to find out more about this awesome, and increasingly rare, bird, check out these links:
https://indonesia.wcs.org/Wildlife/Helmeted-Hornbill.aspx
https://www.nationalgeographic.com/magazine/2018/09/helmeted-hornbill-bird-ivory-illegal-wildlife-trade/
https://www.birdlife.org/asia/projects/helmeted-hornbill
As this set gains support, the plight of the Helmeted Hornbill gains awareness. Poaching thrives when the public is ignorant. This majestically bizarre bird needs our help, and it needs it now.