Ninjago: Day of the Departed Hall of Villainy 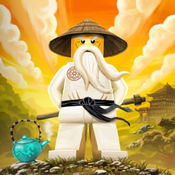 This Project features sliding glass doors, a fireworks cart with stud shooters, storage room for artifacts which can slide out of the side, two lantern stalls outside the hall, removeable roof pieces and the hall of villainy featuring stands for all of the villains, a custom chair for Chen (the one in the 70595 ultra stealth raider would not fit), a picture of Sensei Yang (Wall mounted black bricks), and the Yin blade with light up mechanism when you press down on it's stand.

This set also includes 10 minifigures, Misako, Master Wu, Ghost Cole (He was never in the DOTD set wave), Dr. Sanders, Samukai, Kozu, Chen, Cryptor, Morro and Pythor. But if you wanted less figures in this set you could just have Misako, Wu, Cole, Dr. Sanders and Morro and Samukai as those two are the only ones that weren't part of the DOTD set wave.

Some other things you may notice are that the Departed blades are like the ones in the Movie which I did for extra realizism and that there are two 1x6 medium stone grey Technic Bricks on either side of the hall and a 1x6 Brick Yellow Technic piece at the back of the hall which I added incase anybody wanted to get a little bit creative and add other things to it to make it look cooler! There is also two Round black Horizontal Shafts at the front which would hold a Hall of Villainy Exhibition Banner but there wasn't a piece on Lego Digital Designer. You may also notice that the pillars on the front are on frictionless connectors so that when you take the roof off they will fall to the side so that you can actually reack the cogs that open and close the doors.

The set is exactly 2799 bricks including minifigures so it is not above the 3000-brick limit.

The Mechanism is made up of Several Light pieces and an FX Sound piece so that you can make the Statues come to life! The mechanism works by pressing down the Yin blade's stand making a green light come out of the parts of the floor which are Transparent and Sound also plays which I know is not how the villains came to life but I thought I would add it anyway to give it more Playability.

The sliding storage room can be pushed out by a Technic Beam and contains several items from the Ninja's past such as the Teapot of Tyrahn (Yes I know it was lost in stiix but it would be cool to have in this set), a Jade-Blade, the scroll of Airjitzu, The Blade-Cup (I don't know how ronin got that from the lost city of Ouroboros), The Helmet of Shadows (Added for the Kozu scene in the Movie), The Underworld Helmet, a block of Chronosteel, Six vials of Tigerwidow venom and varios other random items.

Please support this set so that it can get to 10,000 supporters. Thank you...