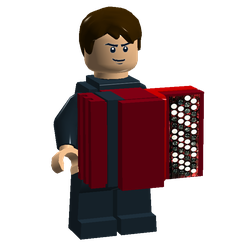 This set, entitled « Ancient Rome – Minerva Templum » , represents a scene of the Ancient Rome featuring a small Temple, dedicated to the Godess Minerva (Athena in Greec).

The temple is disposed on top of stairs, surrounded by two statues representing to vestals.
The temple itself is based on typical roman columns covered with a pediment. The pediment is ornated with sculptures on both sides of the monument.
The main color used is tan.
At the aft of the temple, a small room comprising a statue of the Godess Minerva.
The ground of the temple is paved with colorfull earthenware.

This set comprises :
-  A priest dedicated to Minerva
- a vestal
- the two statues outside
- the Minerva Statue
hence, 5 minifigs in total.