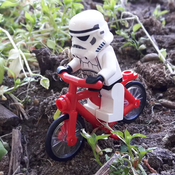 By The Brick Biker
56 comments

Here is the micro scale castle that I have been working on.  It is built out of 122 pieces in light gray, dark gray, black, dark green, medium green, brown, red, and transparent blue.  The castle has four towers going around it, with one small tower on the top of the castle in the middle, from which a bright red flag can be seen.  There are a total of eight windows in the castle, and there is a nice arch way in the front, from which a nice brown bridge extends.  There are five bushes surrounding the castle, as well as some nice green grass.  And of course there is a moat filled with water that goes all around the castle too.  Surrounding the whole model is a black border that gives the model a polished look.

The reason I built this model, is because I have always loved Lego castles, and the castle theme.  I also like building micro scale models, and I just wanted to have a fun and challenging project to work on.

I think this model would make a great Lego set because castles have always been a big part of Lego.  This model would also make a great display piece because it isn't very big, it could fit in a lot of different places, and the black border and all of the colors that I am using look really nice together.  This model would  be great for any fan of Lego, castles, medieval times, micro scale, and displayable models.

Thanks for checking out my model, and please support it.  Also, go check out my other model, which is also a medieval micro scene, and support it too.

By The Brick Biker
56 comments