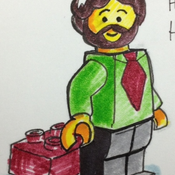 Introducing the Clash of Clans Barbarian in the newly created / released BrickHeadz line! I was lucky enough to attend San Diego Comic Con 2016. Lego had 4 exclusive BrickHeadz sets available as a way to introduce the BrickHeadz line. I was able to get the Superman / Wonder Woman set. I was immediately hooked on this new line of Lego products and could not wait for the official release. I saw the vast potential for a long running series of endless licensed characters and properties.

He proudly sits on display next to the other official BrickHeadz sets (series 1) that Lego just released a week ago! I get almost immediate recognition of who and what he is. Millions of people play Clash of Clans and I think that he deserves the very special Lego BrickHeadz treatment!

I thank you in advance and appreciate any support for this project that you can give.