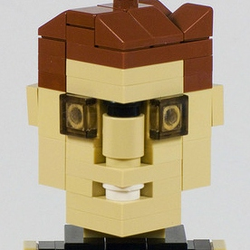 10K Club Member
MacLane
29
Hey there. Some of you may have seen Disney/Pixar's "Toy Story OF TERROR!" (thanks for watching.) Some have asked me, "So is LEGO going to make an official LEGO Bunny set?" The answer is... No. (a bummer, I agree.)

But thanks to the good folks at Cuusoo we might have a shot at changing the course of history. (Well LEGO history, anyways). Now is the the time to stand up and be counted, to DEMAND that a LEGO Bunny set be made. FOR REALS. Like in actual stores!

Now is your chance to own an exact replica of the LEGO Bunny as seen in Disney/Pixar's "Toy Story OF TERROR!" LEGO Bunny was designed for the movie by CubeDude™ creator Angus MacLane using his very own bricks and is 100% screen accurate. Instructions will be included for the stairs, ladder, and cube alt modes as well. No expense will be spared at delivering a consumer product based on this hilarious but insignificant artifact of modern television special history. Vote today and make this little guy a reality!

If you like this build, please consider voting for WALL•E
from Disney/Pixar's "WALL•E"