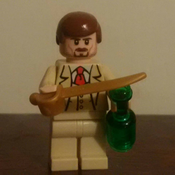 Flash Gordon The 1980’s cult film with amazing soundtrack and memorable Rocket Cycle sequence with Gordon and the Hawkmen against War Rocket Ajax.

The proposed set is designed to evoke good memories and can either sit on a display shelf, or is well sized to play with in-hand with the impetuous boy going to the rescue.

I have wanted to make a model of Flash Gordon's Rocket Cycle for some time. But to make Gordon well, he needs awesome hair. The Bright Light Yellow on the Series 16 Dog Show Winner minifig was just the impetus to do Gordon. I would like to improve the principal minifig with a print of Gordon's black & gold logo vest, though I did found some standard legs with a silver stripe on black pants that looked good.

The Rocket Cycle was hard to create with the various angles of front fuselage. A movable safety bar that folds down and fits exactly inside the sledge took some time trying a number of different moving hinge/connectors to see which was worked well, whilst still maintaining the black/light blue-grey colour mix as best as possible. The upright handlebar console can be moved back and forth to allow the minifig in to position. I had tried a curved brick on the front of the console that looked better but in the film, the model is more flat/slanted.

For the underneath there are not many reference pictures that I could find, mainly resorted to re-watching the film clip as Gordon escapes the Hawkmen’s Sky City. To get the curvature of rocket exhaust bricks and underneath took some artistic license. The rear mounted flags flying at an angle, and rocket flames finish it off.

The set could also have many characters. Given the film's aerial setting I have shown it with versions of the wonderfully bearded Prince Vultan, Biro, Luro and two other Hawkmen.

Vultan comes with a large handguard mace/accessory, with a hooked blade and a small remote platform control device. Biro comes with a detonator/mine awaiting Gordon to fly in and help him in their rescue bid to save the Earth.

The set is designed and photographed using standard Lego bricks.