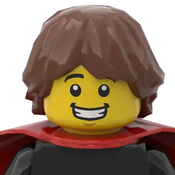 By Beren_Luthien
46 comments
This is a three-dimensional chess set as said in the title. It is built using 560 pieces. The boards are made to look like crystal. When I first began working on this, my original plan was to make the pieces chrome gold and black. When I was finishing up, I decided to stick with the classic black and white pieces.
I am already a fan of both chess and Lego bricks, and when I first saw a three-dimensional chess set, I just knew that I had to create it out of bricks. This is my first LEGO Ideas project.
Although LEGO has previously released several chess sets, we have yet to see a three-dimensional one.
The large amounts of chrome and transparent colors included would make collectors and builders and chess fans alike jump at the opportunity to add this set to their collection. (The fifth image is from left to right a pawn, knight, bishop, rook, queen, and king).