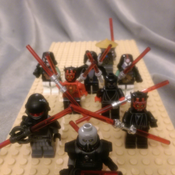 Rey is being chased by a bounty hunter in a pod racer!! As Rey races across the deserts of Jakku in her speeder, Pak Fisto is desperately flying to keep up with Rey and her Force-attuned reflexes. Pak's brother Kam is the mechanical genius and runs the pod racer "chop shop" that supplies all the racing parts. An Imperial pit droid and BB-7 back up Kam and Pak, and the gang is out to get Rey!!

Rey and her speeder are based off of the two movie trailers that have been released so far.

The "chop shop" is fully-playable complete with tools, an interior living space with furniture and bunks, a weapons rack, and a secret access wall. The awning lifts up and down, the door opens and is solid, and the roof piece easily comes off to expose the interior.

BB-7 is based off of BB-8 in the trailers and is movable and articulate. He rolls without problem, and the head can rotate 360 degrees. The Imperial pit droid is an updated version of the pit droid from Episode I.

Both the pod racer and speeder are solid and are made to be handled and played with. Each can be simply set on top of their respective train cars, and racing is the name of the game!! Whether the final set comes with both racing on only one track or two tracks side-by-side, it will take Jedi reflexes to take the curves fast and out-pilot your opponent!!