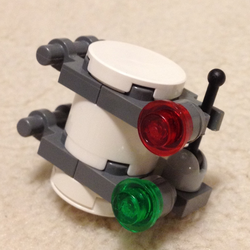 In this series, TB1 is piloted by Scott Tracy, active almost all stories as first response rocket plane and support rescue. So this time I made minifigure scale TB1.

Specs: Minifigure can ride on and wings can fold and unfold. (It was very dificult to make folding wings system! )

Please support this project and realize the LEGO TB1 together!