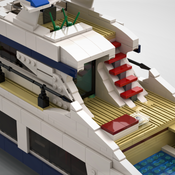 By Blocker007
41 comments
My model is to represent a technique machine with sun moon and earth. Turning a gear would cause a chain reaction, with the earth spinning around the sun, the earth around itself, and the moon spinning around the earth (the sun is also spinning around itself, but that's not the with today's Lego bricks avoidable).
I built it because the solar system is fascinating, and wanted to have a machine with which you can readjust a part (sun, moon and earth) of the solar system.
I am firmly convinced that this model would be a great Lego set, because almost every Lego fan has ever wished for such a thing.
When you like my modell vote for it.