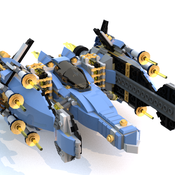 Growing up with my uncle invested in early 90's LEGO themes, I grew to enamor the Ice Planet 2002 line because of its transparent orange laser visors and saws. But come birthdays and holidays as a child, I wished for the LEGO Aquazone line. Later, I was jealous over my younger brother's Ice Dragon Attack from the Ninjago theme, it's color scheme splendid and ingenious.
Mixing the elements I found so compelling from these themes, I built the hybrid snowmobile first, familiarity with the elements coming from the first LEGO Batman- The Batcave: The Penguin and Mr. Freeze's Invasion; the relative size, in comparison to the mini-figure, being derived from Aquazone's Spy Shark.  I added skis to the back of the mini-figure because it looked cool.
A year or so passed, as I admired my single creation. I had tried unsuccessfully throughout that time to imitate my creation, until I found the 4x9 Airplane Wing plate. Immediately, I configured a speeder not unlike LEGO Star Wars Rey's Speeder. It was instant beauty to my LEGO history.
I know we all believe our creations, especially the ones submitted on LEGO Ideas, epitomize our imagination, our fondness for this beloved Danish brick. My rich history, childhood experiences, and adult perceptions of LEGO have all influenced the design of Ice Planet Scout Patrol. I hope you enjoy this creation as much as I do.