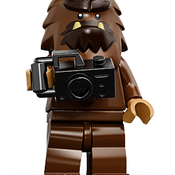 In order to celebrate both the 40 years old of the minifigure and my own 40 years old, I thought it would be nice to come up with a kind of museum that would commemorate the successive steps that led to the 1978 minifig we all cherish.

I started creating with Lego little parts a tall skeleton of the 1974 giant figure, that ancestor built with bricks. Then I created a skeleton of the faceless (and armless) 1975 figurine. But I also wanted this gallery to honour the subsequent evolutions of the 1978 minifigure, including a 2009 microfig skeleton, short legged children, babies (one in the back of his mother and another one in a pushchair) and even the mini-microfigure (here as a toy between the hands of a little boy).

Building the walls, terraces, storefronts and other architectural ornaments of this museum I tried to draw inspiration from the atmosphere of the great Museum of Evolution we are lucky to have here, in Paris, with a lot of skeletons parts, very old wood floor and characteristic floral architectural elements.

Moreover, being quite nostalgic of the Fabuland vanished era, I couldn't but make an allusion to those animal figurines on my museum. In the same way as dinosaurs skeletons in almost any Evolution Museum on the world, Fabuland skeletons couldn't but be here. That's why I mentionned a Fabuland gallery (not visible here) through panels, posters and signs.

I tried to use current Lego elements (I even recycled some plastic clips connecting the ninjago's shuriken that we all usually throw away) as much as possible, but I had to customize myself  the giant skeleton's head as well as the whole microfig's skeleton. I also had to draw myself all the posters and pannels.

I hope you will quite like it. Many thanks for simply viewing. Also thanks for (who knows?) supporting.