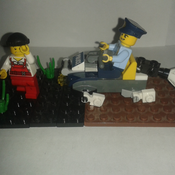 All board and welcome to the modern train station

This set will find:

There are many reason to suppport me in my project and i want to mention two of them,which is important:

Originally,i wanted to design a train,but after seeing some trains.I realized that everyone had their train station,so i dedicated myself to creating a train station for my train that i already had.I think it captures the basic of a train station.This set has more 3700 pieces,but i realized that it was to only 3000,so made chances and i am pleased to saythat i am satisfield with the final design.After all,it took approximately 9 months of work and now it has 1300 pieces.

please tell me think what you think in the coments.

I hope you liked this project!

I have a fantastic day!