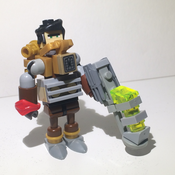 Cow-tron of Moon Mesa, is a tech West theme, sci-fi cowboys and aliens of a foreign frontier. The small outpost known as the Town of Spill Water, is a ruff and tumble area for the brave and adventurous to kick the boots off or to stir up trouble. Grab a drink at Flim Flam’s Saloon, where you can catch Transista playing the piano. While in Town you can bank over at Greeble Johnson’s bank. Be on you best behavior though because Sheriff Grifen Taylor and his deputy Binary Phife are on the look out for anyone trying to break the law.

Like nexo knights I feel young and old will enjoy the mashup of a sci-fi western. Cow-tron is a fun and adventurous ride through a place where space exploration and frontier survival meet in a interseler spaghetti western. Ideally there could be a logo for the theme like the classic space look, with a cows face would have the little rocket circling around it.

Jail breaks, bank robberies, and catching dinner with a show are just the beginnings of the adventures that can be had in a world where  highfalutin aliens and ruff  frontiersmen meet to conquer the surroundings of a distant moon outpost.