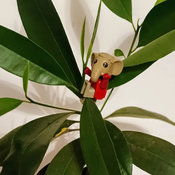 By Acheeraday
24 comments
Life is like a box of ... bricks! You never know what you’re going to build next.
This project combines two of my passions: building with bricks and chocolate! It grew out of an Instagram post where I used an actual praline box made out of cardboard with bricks as chocolates. I later revisited this idea and elaborated on it, this time making the box out of bricks as well and creating some pretty tempting sweets.
The result is 9 different chocolates in a decorative box.
The flavors are (from top left, clockwise, & middle):
Some of the challenges were to find colors that represent sweets and make plastic look tasty and tempting (let me know in the comments if I succeeded :). Also, to design an appealing box that was still simple enough to not overpower the chocolate creations. It also had to have ventilation so that the ‘chocolates' would stay fresh longer (authenticity, right?). I also tried to use unusual Lego bricks like the upside-down table as a praliné base or the vintage bracelet from Lego Scala set 313 from 1979 as a licorice swirl. All in all, it was a fun build with close to 300 bricks used that I am excited to share.
I think this set would appeal to a wide audience because it is cheerful, decorative and has great play value, especially for kids having a tea party with their friends or stuffed toys but also for adults who could use it as a conversation starter showpiece. The box can also be used on its own (maybe as a jewelry box or to play tic tac toe?) and the chocolates would liven up any space. There are many ways to mix and match and rebuild too.