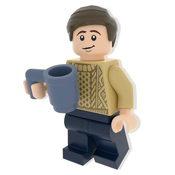 "You shall seal the blinding light that plagues their dreams. You are the Vessel. You are the Hollow Knight."

Hollow Knight is a groundbreaking action-packed 2D adventure game released in 2017 by the indie game studio Team Cherry.  Aside from being one of my personal favorite games of the past few years, Hollow Knight has fundamentally effected the indie scene, helped inspire a resurgence of the metroidvania genre, and even has a sequel in development.

About the Set
In this set, I tried to capture the spirit of the game's first main area, the forgotten crossroads.  I tried to include as many details from the game as I could in this smaller model such as:
Characters
It was a tough call choosing which character to include, but I had to limit this set to only having the most iconic characters that don't spoil too much.  In the end, I included
I feel it's worth noting that all the characters are brick-built rather than minifigures.  This felt like a natural choice considering that most of the Hollow Knight characters have very distinct forms that wouldn't transfer over well at all to the standard minifigures without the use of many new molds.  Let me know if you guys have any suggestions for more characters I can add in updates!
Conclusion
To wrap things up, the whole model is just over 600 pieces and requires some new colors, but no new molds.  All the techniques used are legal, but there may be some of the minor clipping or stability issues that are symptomatic of working with digital bricks.  Thanks so much for taking the time to check out my project, and I hope you'll consider supporting!