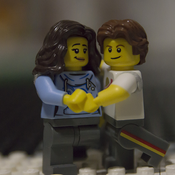 By PaB.Lego.Creations
25 comments
Centurion Prime was only born as a simple idea that came to my mind some years ago. I've always been attracted to big machines and giant robots, so one day I decided I'd make my own out of lego, but instead of going through the internet, comics or movies to copy and paste something that was already there, I came up with my own idea. So I started to build, tried different things over and over again. In the end, after many modifications and upgrades, that took me over a year to understand, there it was. My own giant robot.
Centurion Prime is a perfectly built mech, it stands on its feet with no balance issues and has a pretty good articulation system. The build is very enjoyable, all parts fit perfectly and all of them are both functional and decorative.
All his body parts have moving functions (knees, elbows, neck, wrists and also the thrusters on the back), which gives the opportunity to pose the robot in any way wished.
I hope you'll enjoy thos project and help me to support it!
Thank you!