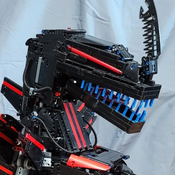 Watch out for the Shadow villain !

Shadow Impus is one of the most powerful bosses in my own novel. He is also the great assistant of the King Liberas. He can change into the shadow and attack the heroes secretly. Hero Factory is developing the technic to arrest the Shadow Impus, but nobody could catch them. His head looks interesting, because he has a curved blue horn. The same blue horn is attached on his back He has a staff called D.V Rian Staff, which can make a wave attack!

Now who can catch this invisible villain?

-Shoot the ball from his D.V Rian Staff!