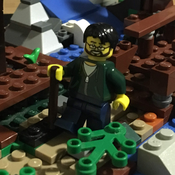 By EmptyLittleWanderer
19 comments
Build three of the main faces from Hallownest!
What is the set based on?
The indie game Hollow Knight by Team Cherry was a journey for me. I was completely drawn in as I explored the amazing world, story and characters Hollow Knight offered. After beating the game I wanted to make a LEGO tribute to my favorite game. I decided to search the Bricklink Studio for Hollow Knight MOCs. At the time, only a couple designs were posted, but "Hollow Knight v2" by the user Laz3rdolphin served as a major inspiration for me. It is a design for the player Knight that I edited and expanded from to include other characters of my own design. My substantial additions to the build to make it distinct from theirs, but I still got permission from Laz3rdolphin to submit a design inspired by theirs. Laz3rdolphin does not have a LEGO Ideas account, but please go give their design on Bricklink support!
What did I include?
Rather than create a specific scene or setting from the game, I decided to focus on characters in a generic setting in the style of the game's artwork. The specific characters I chose to build are thematically representative of the main arc of the game, but in a vague enough way that does not spoil it. I included the player Knight, Hornet, and the mysterious chained knight from the opening cutscene towering over them. I wanted to make a build that both new fans who have only played a little as well as fans who have finished the game alike could appreciate the scope of their adventure, either as foreshadowing or as a retrospective.
About the build:
This set presented me with the challenge of translating smooth, hand-drawn 2d animated characters into LEGO. I embraced the challenge. My goal for this design was to stay true to the art style of the game while also highlighting the blocky, studded nature of LEGO. I have actually built the characters using existing LEGO parts. No new prints or stickers are needed, but some parts would require recolors for the best effect. The characters have VERY limited posability, but my primary focus was on static display. The set is 8.8 inches (22.2 cm) tall and contains just over 550 parts.
Hollow Knight takes place in a medieval setting, linking it to some of the most popular existing themes. Sets like this one have the potential to strengthen the growing connection between the LEGO and gaming communities. It is an example of one of the things the Ideas line does best: encourage people to build anything with LEGO. I hope you will consider supporting this project, and perhaps a few others you might not normally look into.