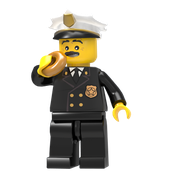 This model is of the Sikorsky VH-3D Sea King known as “Marine One”. This helicopter is operated by HMX-1 (Marine Helicopter Squadron 1) for use as a VIP transport, most commonly the President of the United States. The call sign “Marine One” is only used when the president is on board. HMX-1 operates multiple sea kings amongst other craft.

This model is mini-figure scale and is very detailed with many working features such as doors that open, counter measures that shoot flares, landing gear that can go up or down, working LED lights, and working rotors. The design is very solid and sturdy so it can be picked up and moved around without having to worry about it breaking. The strong construction makes this set great for younger builders.

The main and tail rotors run off of a single medium Power Functions motor powered by a six AAA battery box located in the main fuselage. The battery box also powers the two LED lights, (green and red), on the sponsons of the craft. These features add to realism of this model.

The doors of the helicopter open and act as stairs to enter or exit the craft. The rear door opens to allow you access to the power switch that operates the rotors and lights. The front door opens to expose the cockpit and jump seat where the crew is located. The crew is made up of three mini-figures, two pilots and one crew chief in dress blues. The cockpit has a seat for each pilot and a colorful control panel surrounded by windows.

The underside has an advanced defense system to protect the VIPs and crew onboard. Counter measures to the rear can launch flares to distract anything attacking “Marine One”. 1x1 round plates act as the flares and can be launched with the touch of a button making the set even more interactive.

The sponsons are the round objects protruding from the sides of the fuselage. These act as stabilizers for the aircraft and house the landing gear. The landing gear can be placed in the down position when landed or up while in flight. The sponsons also have working red and green navigation lights.

All in all this set would be great for advanced builders of all ages. It contains 1268 pieces and takes six AAA batteries and comes with three mini-figures. With all the working features and realism in this model it will give builders so much enjoyment creating and viewing one of the most majestic aircraft of our time.

- Landing gear that can go up or down