🔱Percy Jackson and the Olympians: Welcome to Camp🔱 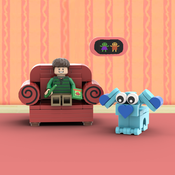 Welcome to Camp Half Blood! This is your first year? No problem. Percy, Annabeth, and Grover will guide you throughout thee camp and even show you a few Easter Eggs along the way! Are you ready? Lets enter the camp!
- The first cabin on the left is for Children of Poseidon, after the big war, the "Big 3" decided not to have any more kids, so you won't see very many half bloods there. But inside, there are 2 bunk beds, a fountain for Iris Messaging, and even a trophy displaying area! On the wall there is a painting of a ship, and next to it is the Minotaur Horn which Percy keeps as a trophy. Finally, the cabin is topped off with a silver trident and a shell representing that this is the cabin of the Sea God, Poseidon.
-The center building is called the Big House. This building is where the desk of Dionysus is located, along with a very fancy silver candle on a grape themed carpet. Upstairs in the attic is where the Oracle of Delphi is located. There are also boxes and boxes of memories stored up their as well. They are just little token here and there that were brought back from many Half Blood's quest.
-Finally we have the Hermes cabin. This is also referred to as the overflow cabin for the Half-Bloods who haven't been acknowledged by their true parent. Which means, there needs to be a lot of housing there, so inside, you can see 4 beds (2 bunks) and 2 sleeping bags. Because Hermes is the God of thieves, I've decided to add in a crow bar, and 2 bags (Which includes a purse in a new color, dark tan).
-There are also 3 "side builds" which include, a table for eating, a pot of sacrificing food to the Gods, and a bow and arrow training area (Plus some spears and swords for Luke to use to teach the Half-Bloods defense tactics).
-The final build in the set is Thalia's pine tree. The tree uses a very simple building process, but looks really cool!
-And now for the minifigures: -The figures included are (as shown above, and in the pictures):
Now that you've had a tour of the camp, have you decided what to build first? Remember, if this project reaches 10,000 supporters it could become a real set! Imagine the possibilities! This set may even open up more doors for Lego to do sets like this in the future, such as sets based off of the Kane Chronicles (Another Rick Riordan book)! Thank you for reading this rather long intro, and I hope you share this project with friends and family. I will be making updates in the future, so make sure to keep checking back!
Thank you :)
-AdventureBrickStudios
Glossary: