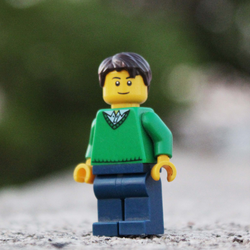 The R.M.S TITANIC has been a well known ship over the course of the years. Probably best known for its shipwreck on her first sail. This lego model is inspired in the actual ship that sank in 1912, I tried to put as many details as posible such as: the life boats, the deck, the mast, the chimenys, and the ship itself. It is not a 100% accurate, but its really close to the real ship.

The ship itself has 4 chimenys, 8 life boats, 2 masts, and a flag in the rear end. The ship itself breaks in half just like the real ship did while sinking. It has a base to put the ship in it. And to add a bit more of playability theres an iceberg.

This would make a really good official lego set due to its accuracy to the real ship, and its playability. Both kids and adults can play, store or both if wanted. It was really easy to build and fun.