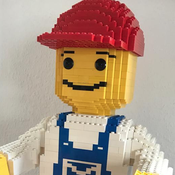 Play Well, Mr. Bean!
Unleash Mr. Bean on a myriad of Lego misadventures:
The Set:
The classic Mr. Bean series is a personal favourite of mine and many others. His distinct brand of mischief seems perfect for Lego and as 2020 is his 30th anniversary it's a great time to celebrate the show.
As Mr. Bean is a very physical comedy, I wanted the set to include as much playability as possible rather than focusing on a single display piece. I've tried to include many classic Mr. Bean set pieces from the original live action TV series.
The main builds of the set include:
The set also includes a collection of other accessories that reference further episodes:
Nearly every episode of the classic series is represented in some way, the only exception being The Return of Mr. Bean due to nearly every scene happening indoors. You could always make him busk on the street a bit though!
I think you can easily create further scenes with your own pieces too. Make a Buckingham Palace Guard House for Mr. Bean to photograph or perhaps a Baby Carriage to accidentally hitch to the back of Mr. Bean's Mini Cooper.
The driver of of Reliant Regal...
We never see the face of Mr. Bean's nemesis on screen, at least not in the live action series. So the driver in this set is a 'cunning' reference to another of Rowan Atkinson's popular roles. Look closely and you'll find a further clue to his identity hidden somewhere within the set!
Thank you very much for looking at my Lego Idea.