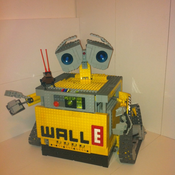 As you can tell I'm a life long LEGO enthusiast and have the latest period of time spent a lot of my building hours trying to recreate things I like off the big screen into reality.

A while after seeing the movie at the end of 2008 I decided that our household wasn't complete without a life like (and in the end almost life size) Wall-E. I went through a few versions working in short periods of time due to studies and my job until finalizing what you see here today, trying to constantly improve stability, function and esthetics. Then I heard of CUUSOO and thought, maybe other households would also like to have one and have now discovered this amazing website fully.

I feel that I have created what my circle of friends and I would like to see as a set in stores and since the movie hasn't been forgotten yet it would be a good opportunity to possibly launch it as a a set more in the direction of the Exclusive line-up or the Model Team series for those a bit more mature builders with the patience for 1.000+ piece sets. Much like the Death Star 10188 and the Super Star Destroyer 10221. Still available for kids, but also more appealing for adults with a demanding inner child.

As a tribute to the spirit of the film I have also added his companion and friend, the cockroach into the set. I am also thinking about building his cooler box since I already have a way to attach it built in.

I hope my pictures and descriptions are good enough and that my Wall-E and other creations to be released in the near future will be to your liking.

Please comment and thank you for your visits and votes!

My Wall-E is fully motorized with the exeption of the arms and back hatch. I have used two 9V Power Functions XL motors for his crawlers on each side which give him full mobility forwards and backwards and rotation in one place. I have also used one 9V Power Functions M motor for the rotation of the head that spins arround unhindered and one more identical motor to make his front loader hatch open and close. All of these functions are powered by an original 9V battery. One remote and three receivers control Wall-E's movements. I have also added a Power Functions light unit to give Wall-E's power indicator a realstic glow.

As mentioned above, Wall-E's front loader hatch can be remotely opened and closed and his arms can be moved to the full extent of the movie version and therfore posed as one wishes, like here on the left in the picture above, in loading mode. All of his arm joints are fully rotational and his arms can also be extended and his fingers and thumbs move individualy.

I have also added a hidden rotating panel that unfolds into his solar cell charging device below the head.

One more detail are his emotion conveying posable eyebrows.

Wall-E folds his head in a tighter position and lowers his neck onto the platfrom it rests on. The platform itself is then lowered down manually into the upper level of his body.

The crawlers are individually slid off of their side mounting positions and with the help of an inner mechanism snapped into a triangular form for easier placement under the head plattform on the inside using the opening below.

The arms are retracted, rotated and placed tightly to the sides using the rail cavity to hide them.

And here he is in his "box"-form. The inside is a bit dark but both crawlers and the head are visible inside the body. No pieces must be entirely removed from the whole to attain this mode. The crawlers are tucked in under the body attached by cables, the arms form a smooth "wall" to the sides and the top of the head acts as a "roof" when in this position.

Not necessarily being of relevance or value to neither the LEGO Group nor you voters, but in my Wall-E I have made it possible for the front lit-up panel to also contain a small media player of your choice thus being able to deliver a soundtrack or conversation from the motion picture itself. This could ofcourse also be achieved with an original LEGO sound brick specifically designed and pre-recorded for this model.