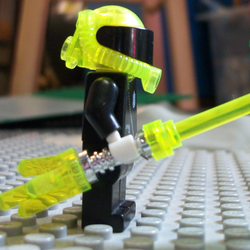 The Ultimatum Escape Rocket is a rocket ship for the astronaut wanting to escape quickly. It has two distinct parts, the glider, with the wings and cockpit, and the booster, with enough power to get the astronaut in question away from his enemies. If crash landing, the booster will split off once the ship breaches an atmosphere. The glider will then...glide... down to the surface.

This set brings the whole concept of S.N.O.T. (studs not on top) to a whole new level. It comes with one minifigure and the two parts of the ship.

Thanks for looking/supporting/following! Be sure to check out my other projects as well as others I have supported!