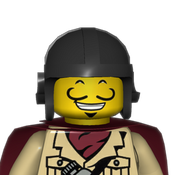 This is Yoda's home on the planet Dagobah, which is featured in Star Wars Episode V: The Empire Strikes Back. It includes the swamp near his home (in which Luke's X-wing sank) and Yoda's hut.  The hut opens in the back to reveal the inside of his home.  Inside it includes a soup pot over a roaring fire and a chest that holds his lightsaber.  On the top of his hut and all around it are swamp features -- vines, trees, leaves, plants, and a snake.

I built this for my son after he received a Yoda minifigure as a gift and we quickly realized there were no other Lego sets from The Empire Strikes Back in which Yoda could be in. It has features to make it look like a swamp and other areas that Luke and Yoda can train in.

I think this would be a great Lego set because there has not been a Dagobah Lego set yet.  It could be played with Luke' X-wing (when he crashed) and it could even include Yoda's escape pod that he flew in Episode III to Dagobah (not pictured in our set).  I am sure even more swamp features could be added to make it look more authentic.  It could even include Luke in his training fatigues and perhaps other features he uses to practice his Jedi training.  An add-on set could be the haunted dream-like cave that Luke enters and battles Darth Vader in.