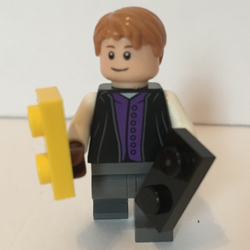 This is my Lego Hansel and Gretel witches lair model. It has a full interior with some interesting details that I added just for the fun of it. Some of these little details were: a bed that you can set your lego figure into, a cauldron that holds multiple lego studs that look like an unusual brew, a table with two chairs and a lamp in the middle, and a shelf of magical potions which stirred the thoughts of the young Hansel and Gretel into making them wonder who this woman really was. I hope that this model makes it to 10k because I think that it is a very original, fun idea that could do very well in stores and also have a lot of interior details and functions. I am not the best Lego designer but I think that I still did a good job of it. My model also has a lot of functions and I think that the lego ideas design team could do a lot better on this build than I did and that they could really turn this into a successful lego set.

Also, I would like to give a shout out to REDGALLANT1 for actually giving me the idea to build this model. I thought that it was a fantastic idea and I started building it when I had the time. I truly do hope to see this set go all the way up the ranks and it is you guys who can help that happen. Hansel and Gretel was one of my most favorite childhood stories and it really meant a lot to me. I really want to see this as a set and I hope you guys do too. Please support, so we can all see more about this model and maybe even see it in the 10k review stage. Thank you!
18