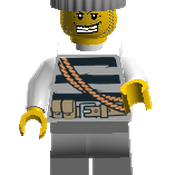 Coco is a 2017 American 3D computer-animated fantasy film produced by Pixar Animation Studios and released by Walt Disney Pictures. Based on an original idea by Lee Unkrich, it is directed by him and co-directed by Adrian Molina. The story follows a 12-year-old boy named Miguel who is accidentally transported to the Land of the Dead, where he seeks the help of his deceased musician great-great-grandfather to return him to his family among the living.

The concept for Coco is inspired by the Mexican Day of the Dead holiday. The film was scripted by Molina and Matthew Aldrich from a story by Unkrich, Jason Katz, Aldrich and Molina. Pixar began developing the animation in 2016; Unkrich and some of the film's crew visited Mexico for research. Composer Michael Giacchino, who had worked on prior Pixar animated features, composed the score.

This project is based on a 32X32 plate with about 3000 bricks. Personally I loved the film and I designed the mausoleum where lies Ernesto de la Cruz, and particularly when Miguel takes from him his guitar, which is the beginning of his adventure