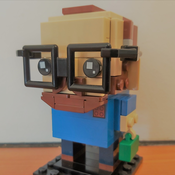 Heart Lake City is under attack from alien monsters! To meet this threat, genius inventor Olivia has teamed up with her friends Mia, Emma, Stephanie and Andrea build to a powerful mechanoid for each of them. They combine their mechs to form ULTRA ZOBO, Planetary Defender! Bravely piloting their new robot ally, they take to the skies to strike back.
The weapons are removable and the flight stabiliser wings fold in and out.

I was challenged to build a mech suit for a minifigure and I thought, why couldn’t the Lego Friends have mech suits? It was important to me that you can see each of the girls piloting their mech, and combining the mechs together was a logic step for friends that do everything together. Other inspiration for this project was the distinctive colour palette for each of the Lego Friends, and the TV show Voltron. It made sense for Olivia and Zobo to be the core of the giant robot, given she is the machine’s inventor.

This model is intended to inspire young girls and remind them they can be powerful and courageous, especially when they work together.
At the moment the model doesn’t transform – it was built for display only, and so functionality was not a priority when I initially built it. However if there is enough interest, I will attempt to upgrade the model so it can split into individual four mech animals and a smaller (but still pretty big) Zobo robot. I will also work on improving its stability and strength. With these improvements, combined with the solid concept and amazing colour scheme, it could be a great set (or collection of five sets).
Check out my other creations on my YouTube channel: https://www.youtube.com/channel/UCgu2ZST-QcJAcmkEO5byWrQ
See my other Ideas sub here: https://ideas.lego.com/projects/bde8929e-deea-4b92-8275-2a18c9db7dcc