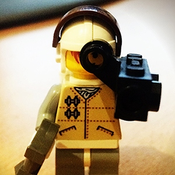 I present my Usonian Style house, a single story dwelling for minifigure bachelors and couples on a budget. Built on a 32x32 baseplate it comes in at around 1200 pieces.

What is a Usonian style house?

In 1936, when the United States was in the depths of an economic depression, American architect Frank Lloyd Wright developed a series of homes he called Usonian. Designed to control costs, Wright's Usonian houses had no attics, no basements, and little ornamentation. These houses were cheap and easy to construct.