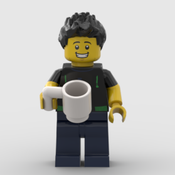 By Vincenzo1986
14 comments
The history of the Libra armor dates back to the times of the sacred wars between Athena and Poseidon, when it was forged by the alchemists of the island of Mu.
Always equipped with twelve weapons, one for each Golden Knight, it is defined as the balance between good and evil due to the responsibility entrusted to the one who wears it.
It has some oriental visual elements, which, together with the presence of a weapon such as the Lance Bracelet, suggest that it normally goes to Knights from those areas. It should be kept in the Great Temple and like all Athena's armor it is normally stored in a chest or Pandora Box.
The old Master is its only known official owner, but it has also been worn on occasion by Sirius.
It almost completely covers the body, in the average of the golden armor seen in the anime, and has an extraordinary resistance to blows, to the point that we see it damaged only in a flashback of number 20 of the classic manga, and the only one to have it completely destroyed was the God Thanatos.
Like all armor, it has a life of its own, can only be worn in defense of justice, and "dies" if the damage is too heavy. Minor damage, on the other hand, repairs itself over time, and this happens more quickly if the armor is placed in its casket.