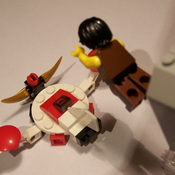 The Banana Splits (show) is a fictional rock band composed of four funny animal characters. The costumed hosts of the show were Fleegle the beagle (guitar, vocals), Bingo the gorilla (drums, vocals), Drooper the lion (bass, vocals) and Snorky the elephant (keyboards, effects).
The series was produced by Hanna-Barbera, and ran for 31 episodes from 1968 to 1970
The show featured both live action and animated segments and was Hanna-Barbera’s first foray into mixing live action with animation.

I created the four friends on-board their "Amphicat" vehicles as appeared in the famous opening theme.

The Amphicat was a six-wheel-drive skid steer amphibious all-terrain vehicle manufactured in the late 1960s through the early 1970s by Mobility Unlimited Inc.
The Canadian version of the Amphicat was featured as the moon buggy used by Moonbase Alpha personnel in the television series Space: 1999.

See also my other "Hanna - Barbera" project on lego ideas: