All aboard!!! (New Minifigures)

It's been some time since the last update and after having been requested a number of times in the comments, I thought I would share 2 new Minifigures, the Driver & Fireman! 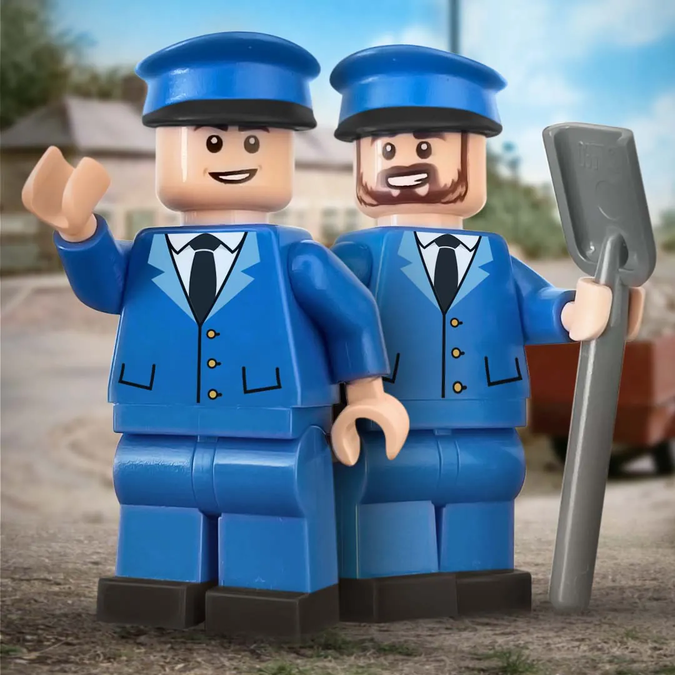 For these characters specifically, I allowed myself some extra creative freedom to get an even better end result! Similar to my other builds, these figures are highly based on their Classic series appearance although they aren't intended to represent any of the characters that appeared.
Note: Due to school starting again, this post had to be pushed back from last week. unfortunately, this is also why I won't be able to stay as active on the project as usual although I will still try my best to keep the project full of steam! Once again, thank you all so much for the continued support of the project :D
On Aug 17, 2021

After last week's update featuring some alternative wheels options, the 3rd/bottom-left option became a popular option! As I myself was also kind of curious to how they would look like on my model, I thought I would share a quick render I made ;D 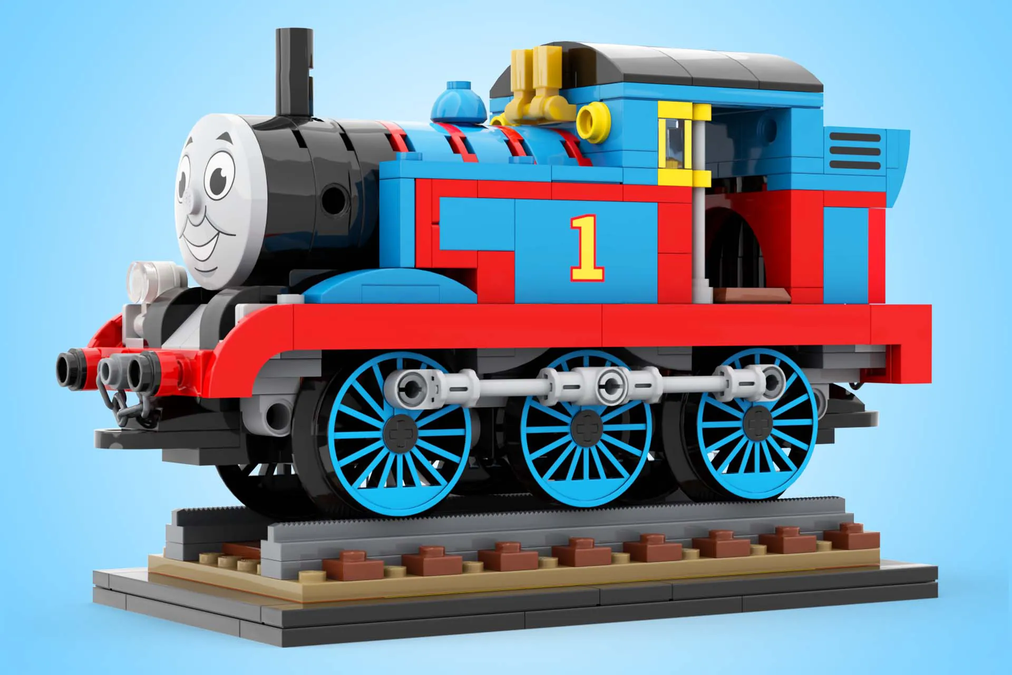 After sharing a render of the much-requested blue wheels on my Thomas model, I was thinking of looking for some alternatives as the regular blue wheels just didn't sit right for me. After going through some options, I thought I would share some of them! 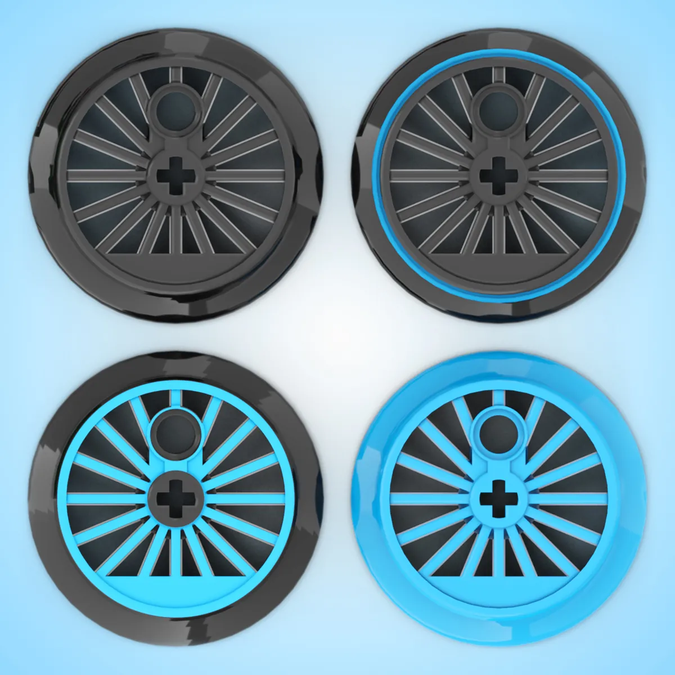 The top-right wheel features a rubber band specifically for the front and back wheels. Though the blue isn't as noticeable here as the others, it should be a nice middle-ground for those who still want to keep the black wheels whilst adding the slightest bit of color (also the added grip is always useful).
The bottom-left wheel features a printed design that keeps the blue limited to only the rims. I'm not sure if it's even possible to print pieces like this, but I still wanted to add the option to see how it would look like! The black and blue wheels are here more for reference though the black wheels are still my personal choice.
On Jul 31, 2021

To celebrate my Thomas the Tank Engine IDEAS project hitting 5.000 supporters, I thought I would share probably the 2 most requested characters to be added to the project, Annie & Clarabel! 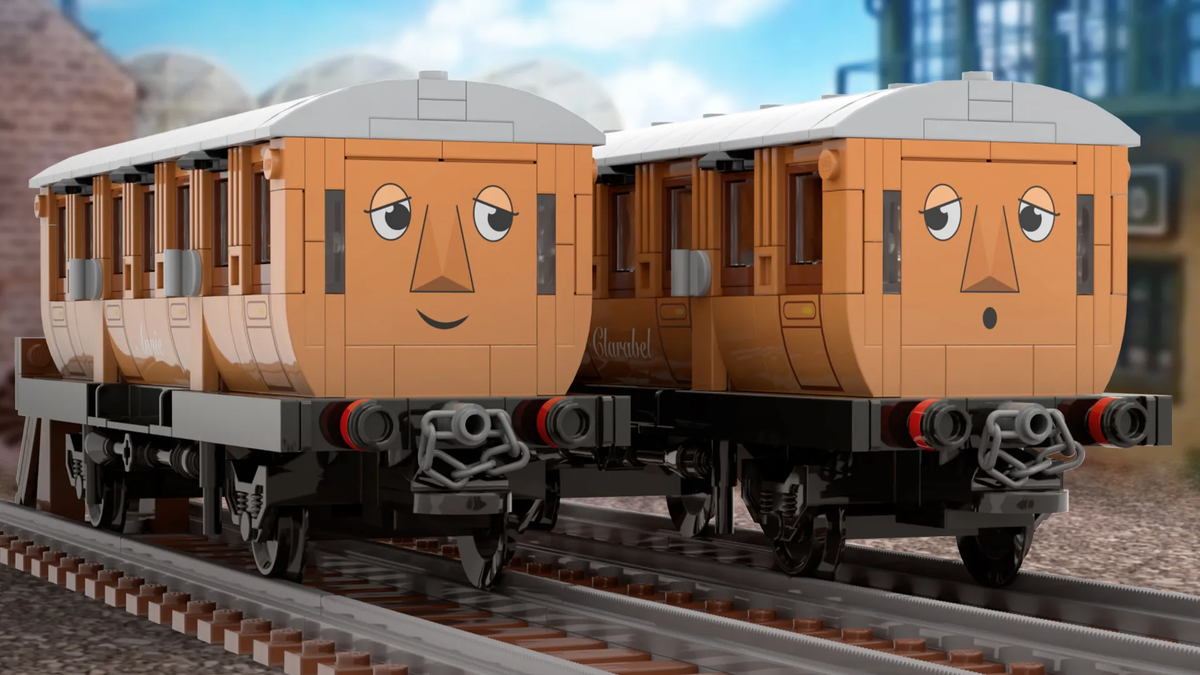 Though still heavily based on the LBSC Stroudley Coaches, I've taken some creative liberties to better fit my Thomas' design. These builds include 7 new printed pieces along with a removable roof that reveals a detailed interior with space for at least 7 minifigures! For more images, check out either my Instagram @KaijuBuildz or my Flickr page: https://bit.ly/3zT9ceN
Once again, thank you all SO MUCH for getting the project to reach 5.000 supporters and for all the positive feedback! Now that we are at the halfway point, I can't wait to see where the project takes us next ;D
On Jul 11, 2021 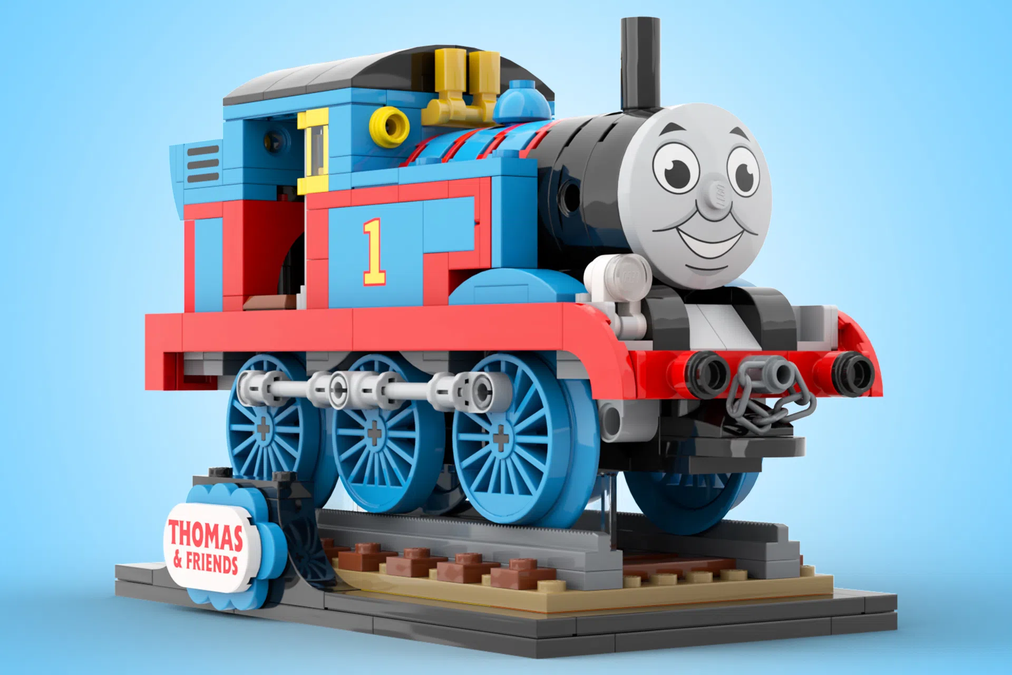 Another quick update! Because many of you asked for it, here's Thomas with his more accurate blue wheels. As it was a pretty easy adjustment and render to make, I wanted to give people the option if they prefer this look for Thomas.
I personally still think the black wheels look better on this build due to the heavy contrasting colors and it having a bit more of a realistic look, but I still wanted to share it with you anyway so you can form your own opinion! :D
On Jun 30, 2021

Thomas had never seen such support before ;D 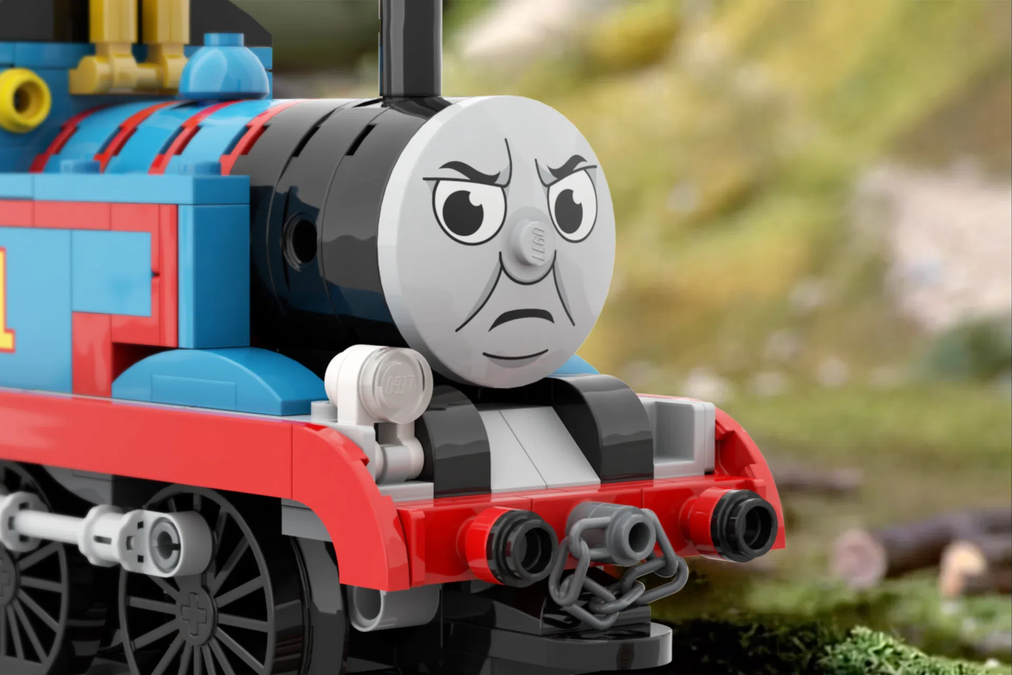 A quick update this time. I just wanted to say thank you all so much for the 4.000 supporters!!! To celebrate this milestone, I thought I would share a quick edit of a very iconic still from the episode "Thomas in Trouble". Internet, you know what to do... ;D
On Jun 15, 2021

Today is a very special day! Not only are we very close to hitting 1/3rd of the supporters needed, today is also the 110th birthday of one Rev. Wilbert Awdry! To celebrate this special day, I tried my best to realize this Legendary author in LEGO form (using mostly existing pieces)
Born in 1911, Wilbert Vere Awdry was an English Anglican clergyman, railway enthusiast and children's author. He was best known for creating The Railway Series (RWS) and its characters, as well as writing the first twenty-six books in the series from 1945 to 1972 of which several stories were later adapted for the television show Thomas & Friends. 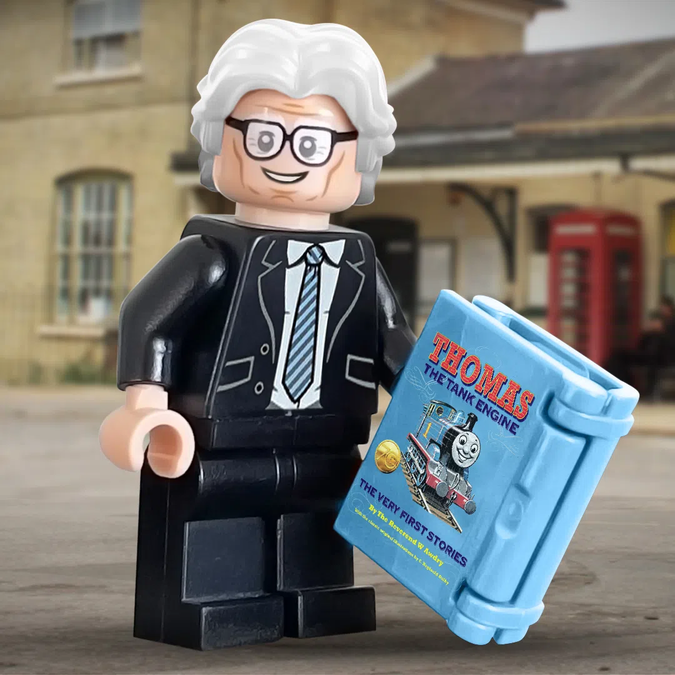 NOTE: This figure was designed using Photoshop and is neither a real Minifigure or for sale
On Jun 06, 2021

Another milestone, another new update! I was hoping to be able to share Annie and Clarabel once we hit 2.500, but you guys just don't seem to be stopping anytime soon. To celebrate this milestone and us currently being the number 1 most popular project on the site, I thought I would share something a bit more old-school instead... ;D 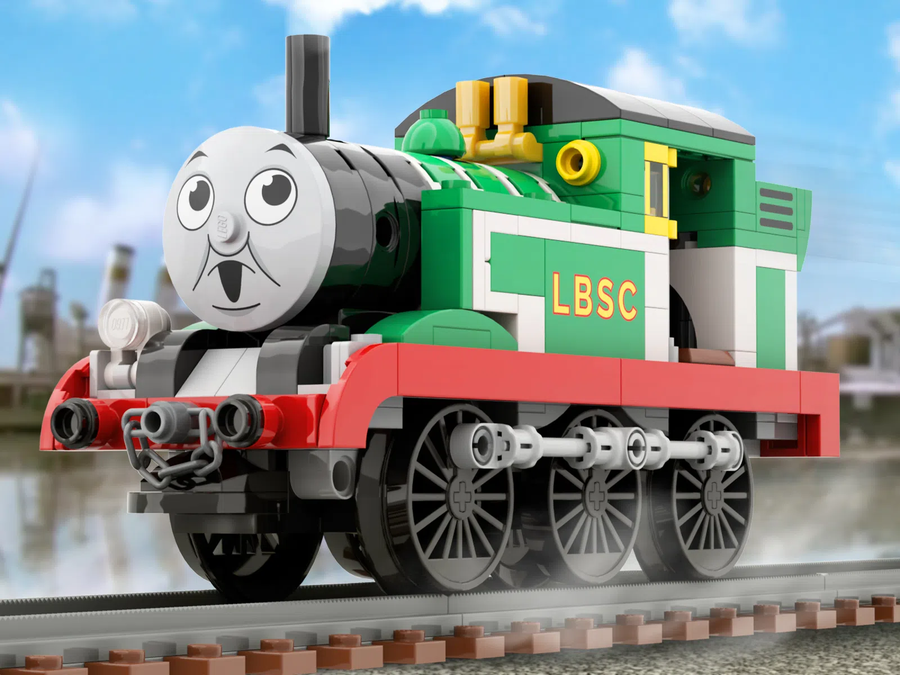 Based on his appearance in The adventure begins, this Thomas is recolored and redecorated with his original LBSC livery from his time before he came to Sodor. I originally did intend to include the number 70 on the side of the cabin, but unfortunately there wasn't enough space for it to fit.
Keep sharing and spreading the project with your friends and family. Once again, thank you all so much!!! I have never had a project grow this fast in such a short time span and I couldn't be more thankful for it :D
On May 25, 2021

Thank you so much to Just2good for not only featuring my project in his most recent OSRS, but also featuring it in the thumbnail, title and description!!! I'm in actual awe right now. With the project hitting the 1k milestone today and then THIS, my day can't be ruined anymore ;D
Again thank you all so much for the support!!! With all the new supporters coming in right now, we might hit the next milestone even faster than I expected.
On May 25, 2021

Thanks for 1k supporters! WOW, It's been barely 1 week and we are already at 1.000 supporters!!! Thanks to you guys for choosing to support my project, the comments and feedback has been stellar over the past few days. Now that we are at 4 digits, we have 600 days left until we reach the next milestone and maybe even to reach that 10k! Because it's all been going so fast and I've been very busy the past week, I've barely been able to make anything new to share with you. No worries though, I've got some more additions coming up very soon... ;D
Please keep sharing and spreading the project with your friends and family. Once again, thank you all so much for the support!!!