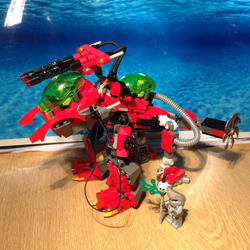 Hello, 'Trapventure' is a model as clichéd as it sounds (but please keep reading), the idea of the model is to trek deep into the jungle searching for gold and other treasures, only the inhabitants of the jungle have set tonnes of traps to stop your 'Trapventurers' from ever reaching the ancient jewels. The journey which lies ahead of the adventurers, which can be completely redesigned if necessary/required, starts at a forest clearing, then over a river and into a small cave and on to a rope bridge over a lake of fire. This leads to the first temple ruin before the adventurers reach the sand-pits and then to a mine filled with the gold, then there are the thick jungle and the intricate cave systems which go to the monsters' lair and the abandoned village. Finally the ancient cave of the snake where the rumoured treasure may be found, or is it just another trap...

This model is filled with traps, both clichéd, new and partially inspired from films and media, it is a child friendly model as it has tonnes of play value and spikes, trap-doors and closing-in-walls are all things LEGO have done previously. The model itself is fairly sturdy with the ability to safely be picked u from the middle, however, as to be expected, the ends are more fragile due to the nature of their construction. The shown model would be around 125cm long, around the same size as the largest model LEGO have made them selves, the design is up for debate as sections of it could be adjusted so that the model itself would be in inter-changeable segments giving more options for children.

I believe it would make a great set as I think traps are not as common as they should be and they have great story potential as kids can imagine how, if they do, escape each one but at the same time it is good for adults as it is filled with mechanisms and is compatible with many ranges already done (e.g. monster fighters and caste), even though it is designed as a stand alone set.

Minifigures-4 greek/roman monsters, please see additional pictures, and 4 adventurers, 2 normal detail and 2 stone variants of the corresponding figures, which can be changed completely.

There are 21 traps in total and 8 additional play features.

The traps, from the clearing to the final cave:

1 A boulder can be 'thrown' into the clearing.

2 A spike can protrude from the walls, walls added by your imagination.

3 Fire can fall from the ceiling.

4 The ladder can collapse.

5 The loosely slatted bridge can collapse.

6 The temple floor shoots up.

7 Quick sand drops an adventurer onto some spikes.

8 A trap-door drops an adventurer into a room with narrowing walls, trap-door and closing-in-walls are separately operated.

11 A foot snare, a chain end-stud attaches to the base of one leg.

12 A small catapult on the top of a tree.

13 A spear falls from between the trees.

14 A large, minifigure compatible hammer, swings down to bash people out of the way.

15 Darts shoot from the wall.

16 A trap-door drops people down into the monsters fire.

17 Spikes rise from the floor.

18 The same function creates a catapult for minifigures.

20 A turn-table into Medusa's lair.

If only one section could be made it should consist of the original traps, 16-19 and corresponding additional features, see trap list for details. However if the model were to be split up then sections of a similar size of the total space of traps 16-18 should suffice.

Thanks for viewing my creation, and even more thanks if you supported it.