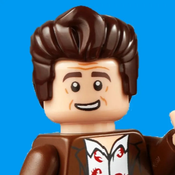 Welcome to Cobra Kai, where the rules are: strike first, strike hard, no mercy.
Even though Cobra Kai was banned for unsportsmanlike conduct, the notorious antagonist dojo was resurrected from the ashes, nearly 40 years, later by none other than Johnny Lawrence.
The 1984 film, the Karate Kid, was not only an inspiring story, but it sparked the idea for the hit Netflix TV show Cobra Kai that would continue the legacy almost 40 years later. As a fan of the original Karate Kid movie as well as the Netflix TV show, I knew that there had to be a Lego set made for Cobra Kai. After bingeing the 4th season of Cobra Kai, I got inspired to make this project: the Cobra Kai Karate dojo.
This project isn't a perfect re-creation of the Cobra Kai dojo that we see in the TV show, but it was heavily inspired by it. On the exterior of the dojo, I added a brick-built Karate sign and a Japanese style awning to fit that style of architecture. I also placed lots of large window pieces near the front doors of the dojo so that any people walking by can see the karate training sessions taking place. For the interior, I tried to get all of the details as accurate as I could to the show, while still building the dojo to the size that I wanted. The roof of the dojo also comes off modularly for the interior to be more easily accessed.
The interior includes:
For this project, I decided to include 5 of the main characters of the Cobra Kai TV show:
I absolutely love Cobra Kai because it continues the Karate Kid story line and gives people of this generation an opportunity to watch a brand new show based on the classics. This project is perfect for any fan of the Cobra Kai TV show or even the Karate Kid movies. If you would like to see this project become an official Lego set, please make sure to press the "support" button above and tell your friends!