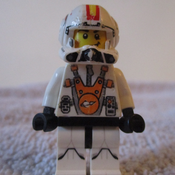 By Legosaurus5
22 comments
This is the a Lost in Space Chariot, which in the show is used as a quick way to get around on a planets surface. Most of the time the Chariot was used to transport people but in the second season it started being used to haul heavier loads with help from a trailer. I wanted to make the stripes blue or orange like in the show but I did not have enough of either of these colours so I choose dark red instead. I think this would make a great set because of the popularity of the show and LEGO has not made  LEGO Lost in Space sets.