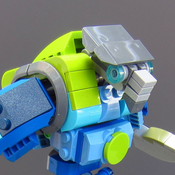 This mech is known as T.O.R.A.L.F. which also an abbreviation and is compeletely my idea. This set would interest people who likes robots, exo-suits and mechs in general as well as i am. My model doesn't have any complicated technics, it is pretty easy to build. This mech has a small cockpit for a one pilot and is fully articulated. On it's left arm, a twin machine gun, and on it's right shoulder, a rocket launcher which has 360° rotation, which can also go up and down. It has a movable head as well as armour pieces everywhere on it's body. This mech is my original design, built first out of Lego parts and then in the LDD.

It is my dream to create a mech, that Lego will accept.

1) 16 points of articulations, not including the armour pieces. Fully articulated!

I hope you enjoy my idea and best regards.