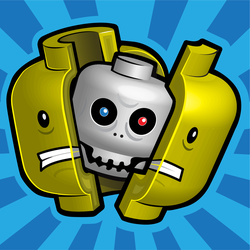 It's the future-realistic / plausible direction that I would like the next Lego-Space line to take.

There is a lot of research to suggest that an underground moon base might be the only long-term option due to the severity of the temperature range on the dark side of the moon.

The furniture can be re-arranged, the rooms can be re-purposed! Think of this as a Space-station Dollhouse.

In my model, I have purposly excluded solar panels as I wanted to maintain a covert nature to the base.

The models (astronauts and spacemen) in this figure could easily be replaced by lego with a modern in production equipment, as they are not the main focus of this model.