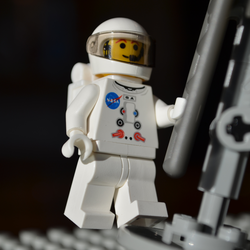 NASA awarded the contract for the Lunar Excursion Module (LEM) to Grumman Aircraft in 1962.  The early versions of the spacecraft featured the basic layout that would enable it to successfully land two astronauts on the surface of the moon and return them safely to the Command/Service Module (CSM).  Its configuration included the descent and ascent stages prescribed by the lunar-orbit rendezvous (LOR) mission concept.  LOR was selected by NASA over direct ascent and earth-orbit rendezvous (EOR) because it proved to be the most efficient method for landing a craft on the moon before the end of the decade.  The lunar module design continued to be refined during the years leading up to the July 20,1969 moon landing.  By 1964, the LEM closely resembled the vehicle’s final design but it was still comprised of curvilinear shapes. Weight considerations ultimately drove the LEM’s ascent stage to rectilinear shapes.

I chose to build the 1964 LEM to celebrate its 50th anniversary.  Designing and assembling the 1964 LEM concept out of Legos presented a number of challenges but failure was never an option.  I hope you appreciate the design of this iconic Apollo spacecraft as much as I enjoyed building it.