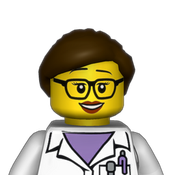 By Archer3105
26 comments
Atoms are the Lego bricks of the universe. When stuck together they form the molecules which make up every bit of matter we are so familiar with; from water and oxygen to diamond and salt.
What better way to show this than to build the Lego of the universe from Lego itself!
Everyone who has ever taken a science class is probably familiar with those fun modelling kits teachers use to first explain and show atoms and molecules. Well, this is exactly that, but even better because it is Lego! With this Molecular Modelling Kit you can build every molecule you can think of, no limits!
Me being a big science nerd immediately fell in love with the idea of a completely universal building method able to make every molecular bond possible out of Lego, when it first came up in me. Single bonds, double bonds and even triple bonds are possible between these Lego atoms, and under virtually all angles.
A few examples of the molecules that can be build with this Modelling Kit:
Diamond, Salt and Wurtzite are crystals, which means that they are a small molecule which repeats a lot. In diamond this is a single carbon (C) atom, in salt this is the Sodium Chloride pair (NaCl) forming a cube, and in wurtzite this is the Zinc Sulphide pair (ZnS) forming an hexagonal shape.
Using a few different variations of atoms and bonds, a small scale is achieved so that even big molecules still are of reasonable size. This makes it perfect as educational tool in science classes, as science toy for kids or as desktop models for science fans of all ages!