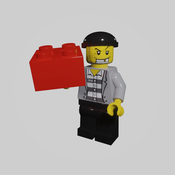 Long time ago, this villa has been bought by a rich lord, whose only problem is that he doesn’t know which secrets are in the house. Unfortunately, a thief is well informed about them and always tries to enter the villa to steal the lord’s gold bars…

When the lord sees the TV in the living room, the thief sees a shutter leading to an unlocked door on the back of the villa. The lord sees an old wall cupboard – the thief a passage to the hidden basement. The lord sees a ruined wall – the thief a secret door leading into the basement. Upstairs, in the bedroom, the lord admires his huge library – the thief knows the torch is a switch to open another secret door to a mysterious book. The lord sees a comfortable bed – the thief lifts it to pull the fireplace forward, uncovering a ladder in the chimney leading to the attic. There, he finds several objects that may be useful one day… Poor boy, you don’t know that the lord doesn’t have his gold bars anymore – he spent them to buy the villa! So whatever you’ll do, you will never reach your target until the lord has earned again enough money!
Although modular buildings are mainly bought by adults, this house can also be played with by children or parents and children together. One plays the lord and the other the thief – will the lord be able to discover the secret passages in his house one day? Maybe he can offer some tours through the rooms and earn money in this way? Then, the thief comes and steals everything… Wasn’t he the first in discovering the passages? So it should be his right to offer the tours and gain money, isn’t it? How will you play the story? And how will this villa look like in your modular city? Will it be beside a bank such that the thief can steal there and hide in the secret rooms in the villa?
I’ve built the villa with 2987 parts and 3 minifigures (one of them is a statue; so 2999 parts in total). All parts are existing in the used colours. The villa measures 32 x 32 x 33 studs and weighs 2558 g.