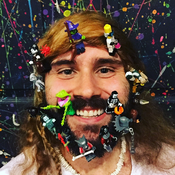 I've designed this set to always have something going on. Whether the Alpha Pack is playing or there's pizza being thrown, Zach and his friends are experiencing the least boring pizza party ever... And that's where your imagination can take control! Will Zach run on stage and belt out a song with the Alpha Pack? Will Headless Harry's head be bounced around like a beach ball at a concert? will any of their zombie friends stage dive into a pile of pizzas? Anything and everything is possible at the Zombie Pizza Party!

Going through my stock of Lego bricks, and including minifigure parts and accesories, I used a total of 543 pieces. I have added pictures of the set in a blacklight as well to show its true party vibe. And here is a link to an interactive video I've made to show closer detail of this set.