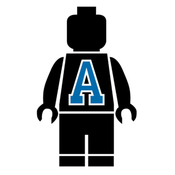 Welcome to the Contemporary Fire Station!

Fire Chief Jackdaw and his crew greets you on the driveway and happily shows you around their beautiful fire station.

The station is housed in a dark red brick building that’s been updated and modernized over time while keeping details like the bell tower and the old cast iron staircase that leads to the living quarters and office on the second floor. There the firefighters can eat, sleep and play video games while waiting for their next emergency call.

The dorm features bunk beds for four firefighters and blinds to keep the sunlight out if they need to take a nap during daytime. Chief Jackdaw’s office holds a desk, chair, city map and a bookcase for his firefighter manuals and personal gear.

From the living quarters a sliding pole leads down to the vehicle bay designed to fit two regular LEGO fire engines (not included) with some room to spare for equipment maintenance. At the foot of the sliding pole the firefighters’ gear hangs ready to be worn in an instance!

This project has been very special to me. I received the 60110 Fire Station as a gift from my wife shortly after our son was born and it’s been standing in my city ever since. It came to symbolize the tough time we experienced together as a family after his birth. When I decided to replace the 60110 set with a MOC fire station I knew I wanted to incorporate a lot of details and elements from the 60110 set as an homage to all it stood for.

That’s why I went with the light bluish tinted windows and garage doors as well as some yellow details here and there. I use a lot of white and light bluish grey on the inside and the sign on the small lawn in front of the station uses white and yellow pieces to keep with the color scheme of LEGO’s fire fighter theme.

This is the perfect fire station for any LEGO city! It fits two fire engines and has plenty of fun details to play with in a relatively compact format.

I hope you will enjoy this model as much as I have while constructing it!