Hercules Quest for the Golden Apple 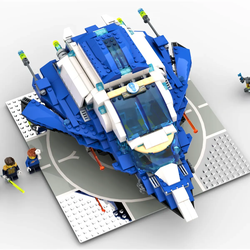 Hercules takes his friends on a quest for the golden apple. With the aid of Pegasus the flying horse, Hercules must get past the serpent guard, defeat the wild boar, and crack open the stone with his sword to gain the golden apple and key that will allow him to return to Mount Olympus. The apples belonged to his father Zeus, a wedding gift from his wife Hera.
This is a child friendly version of the 2005 Viking Ship set (7018). It integrates a heroic Hercules type figure similar to the Disney version released last year with an adapted story of the mythical eleventh labor of Hercules.
Thank you for clicking “support”.
“My spirit flies on the wings of hopeful imagination.”
Submissions - https://ideas.lego.com/profile/STARSEEKER2014/entries#/?query=&sort=top
Facebook Lego Page - @STARSEEKERDianeGronas - https://www.starseekerdianegronas